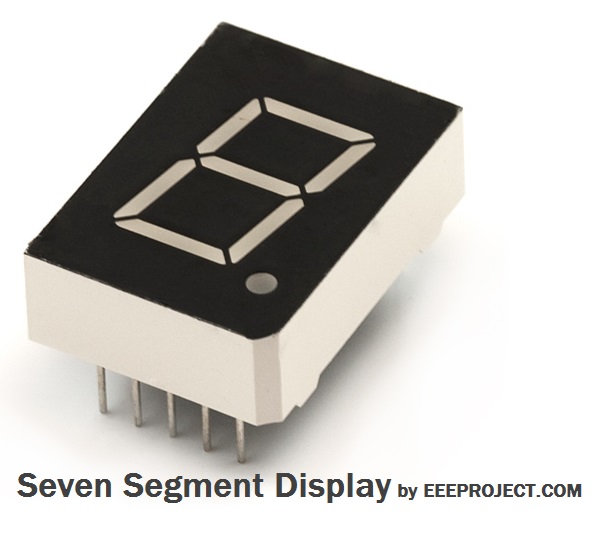 The Seven segment display are available with 10 pin package. There are two common pins which are connected internally and rest of the 8 pins are anodes or cathodes depends upon the type of type of display you are holding that is common anode or common cathode as well, by the classified name itself it can be differentiated weather the two common pins are going to anode or cathode leaving the rest of the eight pins corresponding opposite terminal.

In seven segment display you can easily see one decimal point and  7 display segments in the shape of “8”.

The Seven segment displays are classified according to their pin configuration. 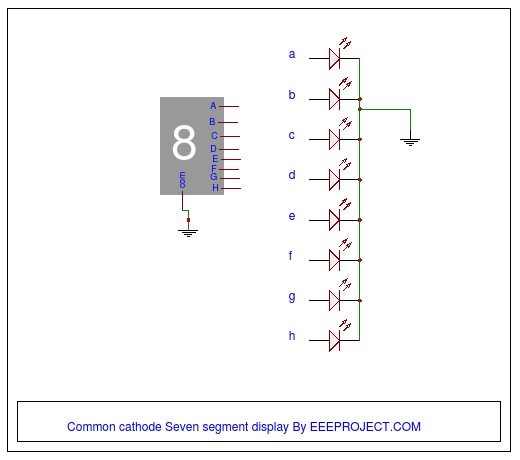 In Common anode Seven segment display the anode of the LEDs are connected together. In order to display a numerical value the anode is given a logic “1” and the corresponding cathodes are given logic “0”. 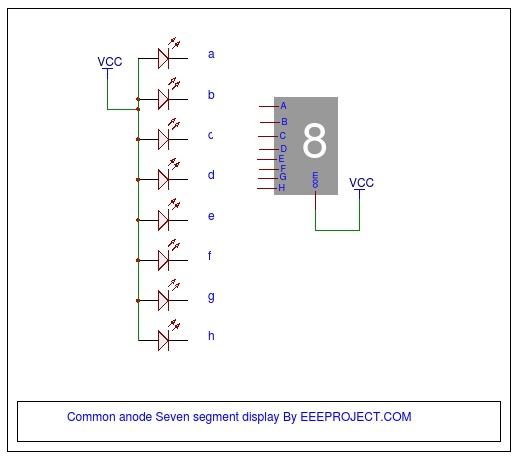 Advantages as well as disadvantages of seven segment display

Seven segment display are popular and have been in use for some time now. They can be found on display at your digital wristwatches to microwave oven etc. They are of the top draw in consumer electronics mainly because of the reasons of ease of production, cost effectiveness along with low power usage. Like all technological inventions, seven segment display does have its own pros and cons.

LED’s or light emitting codes are relatively on the cheaper side. Diodes is one among the simplest of electronic components that are easy to formulate as well. A trip to your local electrician will reveal thousands of LED’s and that too at attractive packages for a few dollars.

As the modules of seven segment circuit is simple, there are less chances of circuit malfunctioning, due to any form of component failure. These type of displays are normally used in diverse environments, from freezing to a hot place. Since there is no form of liquid inside for it to freeze, as with the case of LCD displays, an LED display can work in low temperatures.

Seven display segments are simple electrical components. It is embedded with 4 input leads, an integrated circuit chip, a BCD chip that is known to contain logic gates translating the 4 leads into binary signals along with the seven segment display itself. Most of them are capable of displaying all the 16 hexadecimal values as well.

The LED displays in general terms are fully efficient. The diodes are known to release little energy whereas the light emitting codes, give out more energy than a standard diode, for producing protons that you would need to see. A point to consider is the voltage drop across a LED happens to be so small, that you cannot notice it. Because it is powered with high efficiency, most manufacturers, prefer LED over LCD technology as the power supply requirements is taken care off. It contributes to reduced cost in using the devices as well.

Most of the seven display segments are just limited in displaying the 16 hexadecimal characters. Some of them are known to display numbers from 0 to 9. Though the power of LED technology is to display more than this, these type of seven segment displays are just reduced to binary combinations of the four input leads for a sum total of 16. An integrated circuit technology can increase this somehow, but still there is a number of combinations for such a type of segment to be displayed.

As the cost involved in production of LED is on the cheaper side and since it is easy to make a lot of players have made their entry into this domain. But the market is an open market and there are hardly any form of standards or regulations in place. This includes the environmental regulations as far as pollution is concerned as well. So it is quiet easy to find a manufacturer in the market who goes on to produce substandard LED’s. The only way you can be sure that the LED is of a good quality if you purchase the product yourself and test it.

Once and for all, these days, the internet is flooded with lot of stuff on seven segment display. Therefore, do well research at your end!