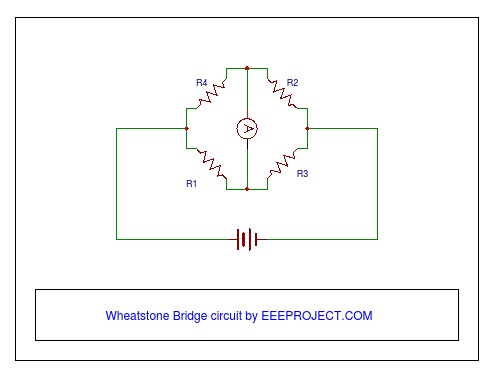 Samuel Hunter Christie invented the Wheatstone bridge in the year 1833, which became popular with the works of Sir Charles Wheatstone in 1843.

An electrical circuit that is set up to measure the unknown value of a resistor and creates a balance between the two legs of the bridge circuit is called a Wheatstone Bridge. As shown in the figure below, three resistances are known (one is variable/adjustable) and the fourth one has to be found out.

Compared to the other measuring instruments such as voltage divider, the concept of Wheatstone bridge is widely used because of the accuracy in its measurement of resistance.

A Wheatstone bridge is a bridge-type structure having four resistors, three of known and one of unknown value.

Here R1, R2, and R3 have known values among which R2 is adjustable and finally Rx is the value to be measured. Along with these resistances, a galvanometer (Vg) is there between B & D, and a DC supply between A & C.

In the Balanced Bridge condition, the current through the galvanometer is zero and also the voltage difference between the points B & D becomes zero, i.e., at both points voltage level would be the same.

Writing equations for the balanced bridge condition would look like:

This detection of zero current in galvanometer is of high precision, thus depending on the level of precision of known values, the unknown resistance can be found with the highest rate of accuracy and precision.

In the Wheatstone bridge experiment, one resistor should always be variable in order to obtain a balanced condition. The Circuit performs at its best when the regulated voltage source is used, instead of the current with repelling characteristics.

Let us consider the below circuit where the bridge is in an unbalanced condition and we need to calculate the voltage difference between Q1 and Q2, i.e., Vout and hence the value of R4 needed to make the bridge balanced.

As per the voltage division law,

Thus, Vout can be found as,

Now to make the bridge balanced, we can find a suitable value for R4 as done below:

Therefore, R4 = 80 volts is the value of resistor which should be used to make the bridge in a balanced condition.

The circuit has many applications, which could easily be found in our daily lives. A few of them are discussed below.

When the resistance varies in proportion to the strain present in the device, strain gauges are usually used. In practice, the resistance range is from 30 ohms to 300 ohms. Since the change in the value of resistance may be a fraction of the full-scale value thus the Wheatstone bridge is the best suitable for higher precision.

For this application, the strain gauge replaces the unknown resistor. Here R2 and R4 would have the same value and R3 is adjustable. Therefore, without disturbing anything else, a rheostat is varied until the galvanometer shows a null deflection. This null deflection implies that the bridge is in a balanced condition and no strain is there on the gauge.

Likewise, in this application also one edge consists of the two fixed resistances and the other edge has photoresistive sensors (LDR) and a potentiometer (Variable resistor).

There is another advantage where one can note, before and after what amount of light the current flows in a positive as well as in a negative direction from one edge to another.

Along with all these advantages, there are a few limitations of the Wheatstone bridge as well, such as: