What is toggling in T flip flop ?

The control input unit the T flip flop circuit is the ‘T’ unit. And, one more unit is present in this circuit that is the clock unit.

T flip flops circuit can also be made by altering or modifying JK flip flops. ‘JK’ in ‘JK flip flop’ stands for ‘Jack Kilby’ that is on the name of the scientist who invented this sequential circuit. It is one of the most versatile flip flop circuits. So, if we modify the JK flip flop a bit, then we can easily construct our desired T flip flop.

If we make the input of both the set (J) unit and reset (K) unit high of JK flip flop. Then it can easily be converted into a T flip flop. 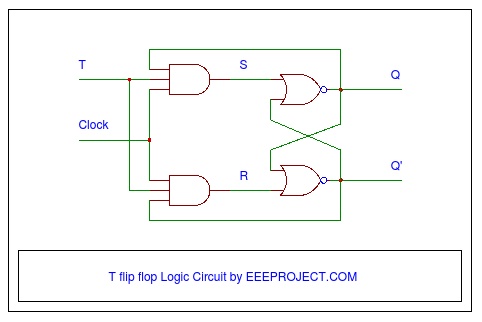 It is basically an edge-triggered circuit which means that it works on high to low or low to high transitions that occur on a clock signal.

And, these narrow triggers that are generated in the circuit cause the change in the output value or we can say it flip-flops (i.e. it changes from one state to another).

You may also like how to test a diode