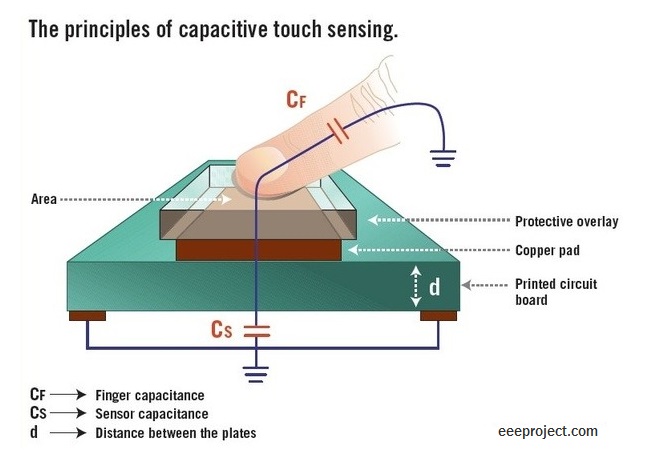 When there is contact or a touch on the surface of the Touch Sensor. It acts like a closed switch and allows the current to flow through it. When the contact is released it acts similar to the opened switch and hence there is no flow of current.

In the below picture you can understand how the touch sensor works. 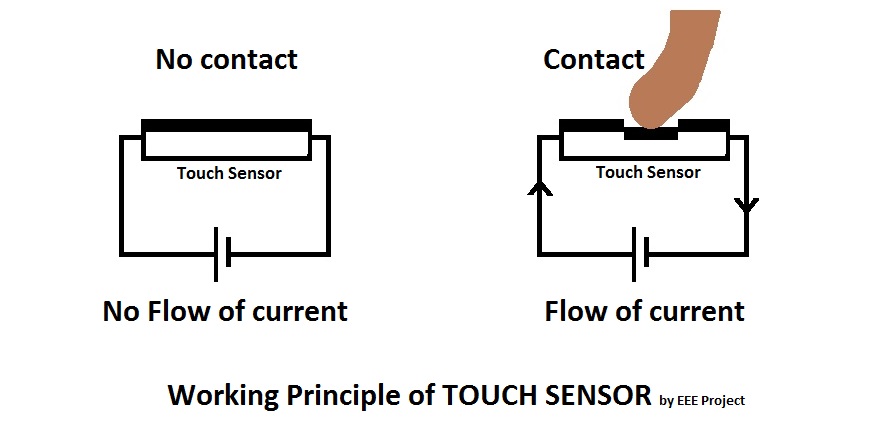 Below is the working of the two type of sensors are explained in detail.

The capacitive sensor is made just similar to the normal capacitor. There are two conductors separated with the insulator.

We know that if the plate has more area the more capacitance it will produce and the more distance between the two plates are the less capacitance will become.

In the Capacitive touch sensor there are the two parallel plates which form a capacitor with the capacitance value represented as C0. As we touch the sensor through our finger, our finger acts like a conductive object and hence produces a capacitance value of CT as shown in the figure below.

If the parallel plates have the more larger area and the thickness of the insulator is very less then there would be the greater value of the touch capacitance (i.e. CT). Therefore the difference of the capacitance value when the plate is touched and the plate is untouched will be greater.

So, by controlling the size of the parallel plate and the thickness of the insulator we can control the sensitivity of the Capacitive touch sensor.

The Capacitive touch sensor however have few drawbacks such as there could be a false trigger since all it needs is to be in a contact with a conducting material and does not require a pressure to operate.

Unlike the capacitive touch the resistive touch sensor does not depends on the electrical properties such as the conductivity of the metallic plates.

The resistive sensor works by sensing the pressure when applied on the surface.

Since there is no need to measure the difference in the capacitance the resistive touch sensor can operate on the non conductive materials such as pen, stick or the finger inside the gloves.

The resistive touch sensor consist of the two conductive layers which are separated by a very small distance or dots. The two layers (i.e the top as well as the bottom layer) are made up of a film. The films are generally coated by the Indium Tin Oxide which is a good conductor of electricity and is also transparent in nature as well.

A constant voltage is applied across the surface of two films. When the pressure is applied with the help of the finger or an stick on the top film, the sensor is activated and senses the touch.

The sensor operates when the enough pressure is applied, the top film touches the bottom film. When the two film touches each other they create the potential drop. The point of contact of the two film creates the voltage divider at that particular coordinate on the X-Y plane assumed at the film.

The change in the voltage hereby detected by a controller circuit and the location (coordinate) at which the voltage divider created is calculated.

The coordinate of the voltage divider in terns of X and Y axis created as the position of touch at which pressure is applied.

Below circuit illustrates that how the resistive touch sensor works. 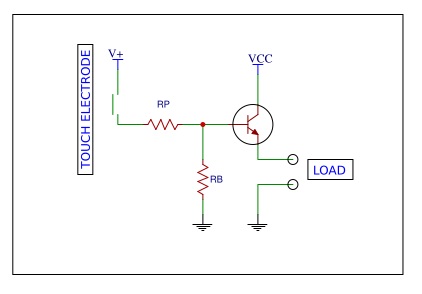 The above circuit shows the basic working of the touch sensor which consist of the touch electrode or the surface.

The resistive touch sensor operates when an object with some resistivity such as our finger touches the surface. Touch of the object with a little resistance forms a close circuit which allows an small amount of current to flow.

In the above circuit the touch causes a very little current to flow.

When the little pressure is applied on the electrode. There is an small flow of current through the base of the transistor. The current enables the resistive touch sensor and the current flows through the load.

“You may like to watch FM transmitter circuit working and application“ 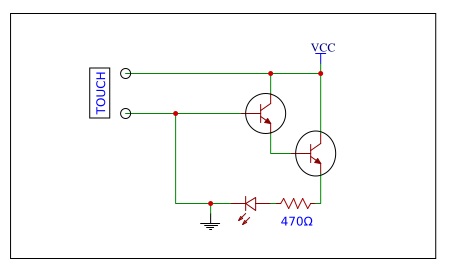 The above circuit consist of the two electrodes, two transistors which are connected as Darlington pair, an LED and a resistor.

When the electrodes are touched or the pressure is applied on the top of the surface. The circuit gets complete and the current gets amplified through the transistors.

The LED indicates the pressure applied or the touch. The resistance is used to prevent the LED from the amplified voltage.

Working principle of a touch sensor

In present scenario, touch sensors are also known as tactile sensors. The basic working principle of a touch sensor is that it detects near proximity (also known as touch) without depending on physical contact. In simple words, you can understand that its working is same as a simple switch or circuit. When any physical medium comes in contact with the touch surface. The internal circuit will be closed inside the sensor and current starts flowing. On the other hand, when this physical contact is broken or released, the circuit will opened.

Hence, there will be no flow of current. The touch sensors are classified in two categories

Types of Touch Sensor and its application

You can very easily spot the Touch Sensors in various applications in your daily life.

As per their functions the Touch Sensors are classified into two types which are used in different circumstances and utilities.

Since these sensors can be produced very easily in a very large scale can be made in very less cost and are very attractive in design. These are widely used in ipods, mobile phones, home appliances, automotive and many other industrial applications. They are used in applications such as measuring pressure, acceleration, distance etc.

Unlike the above these sensors can not sense the small contact or touch. Resistive Touch Sensor require an amount force to operate, so they are used in applications such as Foot pronation monitoring, musical instrument, keypads (mostly used in old mobile phones), resistive touch-pads and many other applications.

Do share your thoughts about the article in below comments. You may ask any query or suggest something better than discussed in the article.