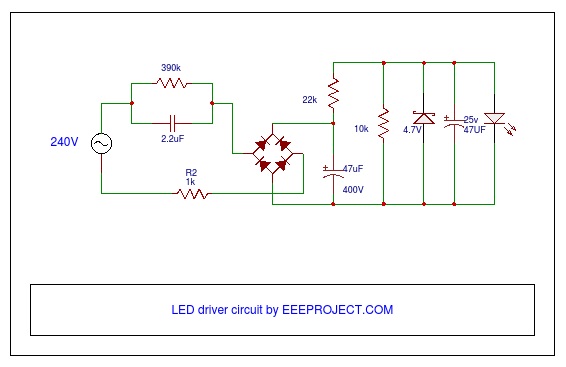 LED i.e., Light Emitting Diode is a special kind of diode that emits energy in the visible band of the electromagnetic spectrum. However, it conducts in forward bias the same as the p-n junction diode. It is used as an optoelectronic device.

Now let me ask you a simple question. At our home we get 230 volts AC supply, can we give this directly to an LED? The answer should be Of course not. This is because an LED needs a constant current input. Thus to serve this purpose, we need a driver circuit.

In this particular article, we will be learning about the design of a 230 volts LED driver Circuit. Generally, an approach of using a transformer for AC to DC power supply is widely used. But just think will it be a good option for driving a load like an LED? Not at all. So let us try it out the other way.

I hope after the above discussion you are very clear with the aim of the article. Yes, we have to design a transformerless LED driver circuit (which can be used at home especially.)

The driver circuit design contains AC capacitors that are designed for high voltage and are connected line to line. The basic function of the capacitor is to limit the current of the supply. As the capacitor only reduces the current, high voltage is delt (rectification and regulation) in the later part of the circuit.

Components of a LED driver circuit

The X-rated capacitor is the most vital component here as we are designing a transformerless driver. Let us calculate the capacitive reactance as below:

Therefore, from Ohm’s Law the capacitor current, I = V/R

Now the power rating of this resistor needs to be calculated, as it determines the amount of power it can dissipate.

putting all the values, we get

So the rectified regulated voltage along with the limited current is given to the LED load.

I hope you have gained some ideas about designing the driver circuit. I would love to see any new creative ideas on the same in the comment section below. Also, give your feedback on the article (design) above, so as we can keep on improving on the quality for you.