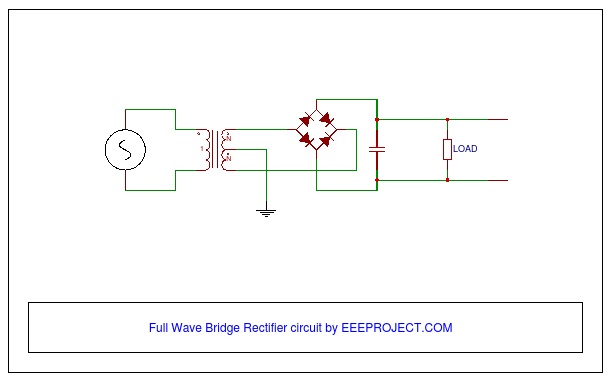 The Full Wave Bridge Rectifier Circuit is a combination of four diodes connected in the form of a diamond or a bridge as shown in the circuit.

The full-wave rectifier circuit does rectify the AC voltage into DC voltage.

But, the pulse character is still intact in the converted/rectified dc voltage in the form of the ripple of a half pulse as shown in the waveform below.

In order to get the average value of the positive pulses in the obtained DC voltage, we must use a filter circuit or a capacitor which reduces the repel and approx our dc voltage waveform to the straight line.

Note: Cutting down on the pulse completely from the Pulsated DC voltage is very much impossible in practice.

The Full-wave Rectifier Circuit can be seen in a large number of applications from mobile-laptop chargers to power supply for various machinery.

This bridge rectifier circuit works on a simple mechanism.

The working of the full-wave Bridge Rectifier Circuit is divided into two cycles which are then filtered in order to reduce the pulse or the repel on the DC voltage.

The two cycles of the Full-wave bridge rectifier are classified below:

The two cycles that are the first and the second half cycle combine and become a DC voltage.

The generated DC voltage has a Pulse or ripple property which makes it less useful when it comes to using it as a proper power supply in various applications.

The remains of the pulse or ripple in the DC output of the full-wave bridge rectifier bridge is then rectified with the help of a capacitor.

After using the capacitor the ripple is reduced, the reduction of ripple depends on the rating of the capacitor (in µF mostly) used to filter the DC voltage.